Last night's Jackpot Euro has not been won!

Which means that euromillions jackpot rolled over to € 27,000,000 Euro and will be available in the next EuroMillions draw 4 september 2009.

Remember: IF YOU WANNA NICK IT, BUY THE TICKET! Keep your fingers crossed for next time! Click on the following link to make sure you don't miss out on the next 27,000,000 Euro draw this Friday 4 sept. 2009!

There is one extremely big mega jackpot this friday 28 august 2009 in US Mega Millions Lottery.

What would you do with that kind of cash?? Think about it while you will be waiting for results.

One extremely lucky player has scooped 147,807,300 Euros in last night's draw! This lucky person is from Toscany, Italy.

That means an est. 38,000,000 Euros Jackpot is waiting to be won in the next SuperEna draw!
(Approx. Dollars or Pounds)!

Keep your fingers crossed for next time!

Email ThisBlogThis!Share to TwitterShare to FacebookShare to Pinterest
Označenia: superena

Remember: IF YOU WANNA NICK IT, BUY THE TICKET! Keep your fingers crossed for next time! Click on the following link to make sure you don't miss out on the next 15,000,000 Euro draw this Friday 28 August 2009!

Email ThisBlogThis!Share to TwitterShare to FacebookShare to Pinterest
Označenia: euro-millions-results

Record-breaking SuperEna lotto jackpot in Italy once again disappointed millions of Italians as well as foreign travellers who had crossed the border to join the hunt for the rising jackpot.

No one guessed the winning combination of the Superenalotto game and the highest prize ever offered by the Italian lotto grew to 147 million euros (£127 million).

Germans, Austrians and other foreign citizens headed into Italy to buy lottery ticket before the draw. Some of them flew into Milan for a few hours just for their chance to win italy jackpot.

Besides the free seats, the winners were treated to a heaping plateful of pasta, a cup of espresso and the opportunity to buy Superenalotto tickets at Milan airport.

Later , without ever leaving the Milan airport, the passengers were flying back home, "just in time for dinner and to see if they've won," said Italy private Canale 5 TV.

No one has won since January, and so the Superenalotto jackpot is Italy's biggest ever. According to Italian news reports, the biggest in Europe, as well. Draws are three times a week.

Also french visitors were driving into northwest Italy for a chance to buy and play the lotto.

Superenalotto tickets appeared to be as much popular as postcards in Venice souvenir shops.

You do not have to travel to Italy for your chance to win this dream jackpot. Just buy your SuperEna ticket online.

Are you STILL looking for
lots of EXTRA cash?

Just about everyone is.

But the cash really is here and it’s simply waiting for you to grab your share!

Did you know that every single week, over 22 million people play the lottery?

At least - even at just £1 per player - that puts £22 million on the table. And most players spend considerably more than that.

But, surprisingly, only 1% of players ever play online.

What does that tell you?

That there is a simply gigantic business opportunity waiting for you.

You can have your business working
in less than 5 minutes!

Register for free here and you can earn money from every player you ever sign up who plays the UK Lotto, EuroMillions and the Spanish Superdraws.

And yes, you really can EARN BIG MONEY from every single player you ever sign up and you can also build a team and earn more commissions from THEIR businesses.

You can see how straightforward
it all is here:

If you’ve ever wanted to make really serious money EASILY, this is the perfect way to do it
... in just a few seconds! 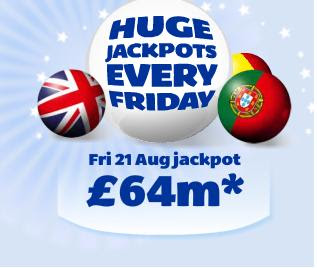 There is another Euro Millions Lottery jackpot rollover for next Friday 21 august 2009.
This Jackpot is estimated €70 millions euro.

Email ThisBlogThis!Share to TwitterShare to FacebookShare to Pinterest
Označenia: euro-millions-lottery-jackpot-rollover

Since there was no jackpot winner last euro millions lotto draw, we have a new and bigger EuroMillions lotto jackpot prepared for us next Friday 21 august 2009. It is another rollover and is estimated: €75 millions euro!!!!

Did you know that playing with a special euro millions e-lottery syndicate you could be playing with better odds and bigger chance up to 36 times to win and you are guaranteed to match both lucky stars in each draw? Increase your chances. Try now!

Email ThisBlogThis!Share to TwitterShare to FacebookShare to Pinterest
Označenia: euro-millions-results

* LottaRewards is free to JOIN and offers you the chance to make some great commission.

* We offer up to 25% commission (revenue share model) which is unrivalled in lottery affiliate industry. Your commission is based on the entire amount of the tiket sale and not only the profit.

* Our program offers commission on the lotteries (SuperEna lotto, EuroMillions lottery, MegaMillions, PowerBall and UK National Lottery) promoted by PlayUkinternet.com, the online ticket purchasing service with over 10 years of experience in its industry. This gives us in-depth knowledge of what works coupled with the credibility necessary to succeed.

* Your referred customers remain your customers for ever - meaning lifetime rewards for each referral you refer. The only condition is that also you remain a part of our program by advertising.

* Among the many other incentives we offer, we also bring fantastic annual competitions to retain your customers, who in turn produce great lifetime values.

* Monitor your sales from day to day!

* Our program pays out millions in commission every year!

* Joining our Affiliate Program is really easy, simply fill out the ONLINE APPLICATION FORM! After your application has been approved you will be able to start promoting us to earn yourself great commission.

* Refer affiliates to us - Send affiliates our way and if they sign up you can earn commission from the sales their customers make. Advertise the LottaRewards program and start signing up sub-affiliates today!

Email ThisBlogThis!Share to TwitterShare to FacebookShare to Pinterest
Označenia: make-money

It's a Euro Millions TRIPLE Rollover!
Next estimated Jackpot for
Friday 14th August 2009 is
£49 MILLION

The e-lottery Syndicate
GUARANTEES BOTH Lucky Stars
in every EuroMillions draw!

There were no winners of the Euromillions this week so there is another massive rollover next friday…It’s worth an estimated £49,000,000. Remember this is paid in a lump sum and is tax free unlike many other lotteries.

An affordable £5 A WEEK gives you and your syndicate 36 single-line entries
in every draw, and a 3,600% better chance of scooping a jackpot share.

You really DON'T want to miss out. It's best to get your place in a syndicate NOW before you forget - just hit the button below

Play from almost anywhere in the World!!
We have members in over 133 countries
Winnings sent Directly to You!

Email ThisBlogThis!Share to TwitterShare to FacebookShare to Pinterest
Označenia: euro-millions-lottery-jackpot-rollover

Pilot - a person duly qualified to operate an airplane, balloon, or other aircraft.

With 4 COLOSSAL ROLLOVERS this week, let www.playhugelottos.com steer you in the direction of wealth and luxury!

Ready for take off (and ready for YOU to take it), tonight’s SuperEna jackpot is at an astonishing €132,000,000! Ever thought about having a runway as your backyard?

Play ALL these jackpots (AND MORE) at www.playhugelottos.com – you might be flying high a lot sooner than you think!

A EuroMillions Superdraw will be (according to info given to us) held on Friday 18 September 2009. Details of this Euro Superdraw are not announced yet, but it is believed that the super jackpot will be worth €100,000,000 (aprox. £85,000,000), so if you don’t win the triple rollover jackpot this Friday 14 august, there will be plenty more EuroMillions to win soon!

The last Euro Millions Superdraw took its place on Friday 6 March 2009. Two lucky players (one from Austria and one from France) matched five main numbers and both Lucky Star numbers. Each of them took €50,000,000 prize home. Whether the same scenario will happen in September, or whether there will be a single player only to scoop the entire amount, is something that everybody will be itching to find out!

Important thing to know is that you can increase your chances of winning next EuroMillions Superdraw, or any other EuroMillions lotto game. All you need to do is to become a member of a professional euromillions syndicate. Just click the button below to learn more.

Email ThisBlogThis!Share to TwitterShare to FacebookShare to Pinterest
Označenia: euro-millions-superdraw

The EuroMillions has rolled over, yet again, making the estimated jackpot a massive £49 Million for the draw on Friday, 14th August!

By playing in an euro e-lottery syndicate, you will receive a share of 36 single line entries, and you are GUARANTEED to match BOTH Lucky Stars.

Each syndicate member could receive over £1.25 Million!

Yes, If an e-lottery syndicate was the only euro millions jackpot winner, each syndicate member would receive over £1.25 Million!

Email ThisBlogThis!Share to TwitterShare to FacebookShare to Pinterest
Označenia: euro-millions-syndicate

Congratulations to all of the e-lottery members whose syndicate had a 4-ball uk lotto win on Saturday, 1st August. The uk lottery syndicate won a total of £7,378, and each individual syndicate member has received £150.57.

Just look at how close this syndicate was to matching ALL of the numbers drawn! If 24 had been drawn instead of 27, this e-lottery syndicate could have won over £4.5 Million! Imagine winning a share of that!

What a perfect example of how e-lottery really is the smarter way to play.

Best of luck to all e-lottery members for future draws!

There were no jackpot winners on last UK National Lotto draw (Wednesday 5 August 2009) meaning Saturdays draw will be a rollover with estimated jackpot of £7.5 Million!

Would you like to increase your chances of scooping a share of this UK National Lottery rollover?

e-Lottery has been around since 2002 and in the last 4 weeks alone, 29,286 e-Lottery players have won some cash prizes in the UK Lotto draws!

e-Lottery UK Syndicate players are guaranteed to match one of the 6 balls drawn in every draw and so increase their chances of scooping the jackpot by 733%!!

Since there was no jackpot winner last euro loto draw, we have a new and bigger EuroMillions lotto jackpot prepared for us next Friday 15 august 2009. It is triple rollover and is estimated: €60 millions euro!!!!

Did you know that playing with a special euro millions e-lottery syndicate you could be playing with better odds and bigger chance up to 36 times to win and you are guaranteed to match both lucky stars in each draw? Increase your chances. Try now!

“Chaffeur – noun: A person employed to drive a private automobile or limousine for the owner."

Win ANY of this week’s jackpots, and you could have a different chauffeur everyday for the rest of your life! Whether you prefer Sunday afternoon drives sipping champagne in your limo, or joyrides in your Bugatti Veyron, life will never be the same again!

Enter NOW – you might find yourself in the fast lane on the road to riches!”


Best of luck when playing!

Email ThisBlogThis!Share to TwitterShare to FacebookShare to Pinterest
Označenia: superena

Accountant - noun - a person whose profession is inspecting and auditing personal or commercial accounts.

With your bank balance about to fluctuate this week, it may be pertinent to invest in a few of these professionals!

According to our financial advisors, you would be able to buy ABSOLUTELY ANYTHING you’ve EVER wanted with that kind of cash!

As evil as it may be, we at www.playhugelottos.com want you to feel the “dilemma” of having an embarrassment of riches!"

Best of luck when playing!

An unabated run of rollovers has caused lottery players all over the world to lick their lips in anticipation of the SuperEnaLotto's biggest ever prize payout. The jackpot is currently larger than the previous record of €100,765,193 in October 2008.

It is DOUBLE ROLLOVER 7 august

That means that another est. €40,000,000 will be available in the next EuroMillions draw.

Keep your fingers crossed for next time!

Play with better odds...click below