What Lottery Millionaires Do Next 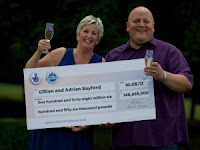 Ask anyone what they would do after winning the lottery, and they would probably said: “Quit my job.” But according to a new UK study , almost a fifth of lottery millionaires actually carried on working.

Only 59 percent of them gave up work.

The study of spending and investment of the 3 000 lucky lottery players was launched in 1994 and also revealed that these winners created a further 3 780 millionaires among their children, family and friends.

The research discovered that an Audi was the most popular car among these 3 000; that America was a favourite holiday destination and almost 30% had a Jacuzzi at home.

This year Adrian and Gillian Bayford became  516th richest people of Britain after £148m EuroMillions jackpot. Mr Bayford is back at work at his music shop.

Luke Pittard, winner of £1.3m National Lottery in 2006, after buying  him a new home and funding his wedding he returned to work. “I loved working at McDonald's and I'm really enjoying being there again,”
o 12:34 AM