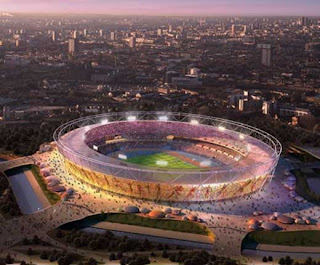 2012 will see the UK hosting the Olympic Games and Paralympic Games come to London, and thanks to National Lottery partnership with London 2012 places players at the heart of it. The National Lottery will be contributing £2.2 billion towards London 2012, of which £750 million will come from specially designated lottery games. All the Good Causes money raised from sales of these lotto games will go towards London 2012.

Thanks to the players of The National Lottery, the Olympic Park in Stratford is taking shape in style - with the 80,000-seater Olympic Stadium fast becoming a stunning focal point.

The arena will be the centrepiece of the London 2012 Olympic and Paralympic Games, staging the opening and closing ceremonies as well as the track and field programmes. Construction of this stadium began in May 2008 and is on course for completion in the Summer of 2011. The external structure of the stadium is finished, including the sections to support the roof and upper tier terracing. Eight large cranes lifted the 28 steel roof trusses in place, with each truss weighing 15 tonnes. It is expected the roof will be fully complete with the covering installed by autumn 2010.

The International Olympic Committee have been impressed with the fast progress being made and their President Jacques Rogge said: “I am in no doubt that in 2012 we will see a great Games that will make a difference to us all.”

In another exciting development for London 2012, the Cultural Olympiad, the festival of celebration to go alongside the Games, now has its funding in place thanks to £16m of National Lottery funding, further illustrating the unique way in which National Lottery players’ are supporting London 2012.

With a UK National Lottery Syndicate you get...